6th CUTS-CIRC Biennial Conference on Competition, Regulation and Development Our Senior Fellow, Garima Sodhi, presented “An Analysis of Important Recommendations of the CLRC” on behalf of CIRC and CUTS International in a panel discussion on the theme “The Special Case of Developing Economies: Are they Uniquely Placed in Online Economy? What Measures Can They Formulate to Leverage Online Economy for Sustainable Development?” at the conference December 01st-02nd 2019 | New Delhi, India.  Presentation 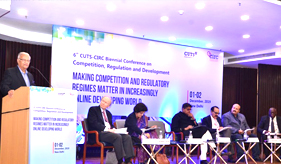 The theme of this year is “Making Competition and Regulatory Regimes Matter in Increasingly Online Developing World”. The conference aims to discuss issues at the intersection of the online economy, anti-trust and regulation. Despite having global ramifications, this discussion is unfortunately restricted to the developed economies. 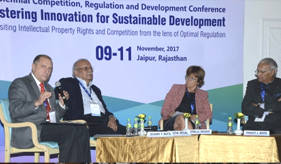 The objective of the conference was to bring research and empirical evidence on two seemingly contentious policy and regulatory issues which are far from being settled: a) the interface between competition and intellectual property rights (IPRs); and b) the role of competition and regulation vis-à-vis disruptive technologies. Alongside this, the imperative scope of innovation, collaboration, partnership, knowledge sharing and optimal resource allocation between different stakeholders, private and public were discussed.

Nairobi, December 12-13, 2015 The conference objective was to highlight ways in competition and regulatory reforms can be used for achieving developmental objectives, especially some of the challenges that the post-2015 agenda presents – referred to as the Sustainable Development Goals (SDGs). 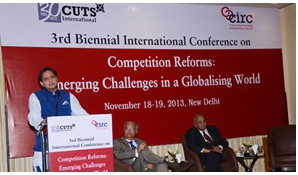 New Delhi, November 18-19, 2013 The conference was another attempt to forge convergence by putting on display different approaches for rationalising, formulating and evaluating economic regulation as well as defining stakeholder participation in such regulation. 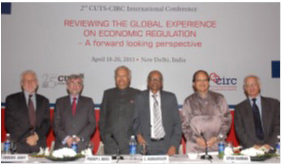 New Delhi, April 18-20, 2011 The aim of the conference was to stimulate research and thinking among governments and other segments of the policy community on the future agenda of regulatory reforms. 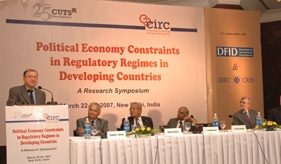 New Delhi, March 22-24, 2007 The Symposium was organised to deliberate on research findings that emerged in the first cycle of the “Competition, Regulation and Development Research Forum (CDRF)” Project. Research papers focusing on political economy and governance constraints that developing countries face in implementing their competition and regulatory regimes were discussed at the symposium.